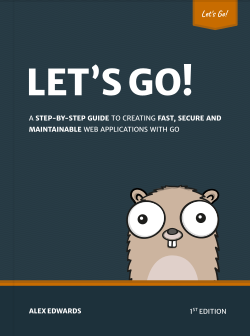 Working with Redis in Go

In this post I'm going to be looking at using Redis as a data persistence layer for a Go application. We'll start by explaining a few of the essential concepts, and then build a working web application which highlights some techniques for using Redis in a concurrency-safe way.

This post assumes a basic knowledge of Redis itself (and a working installation, if you want to follow along). If you haven't used Redis before, I highly recommend reading the Little Book of Redis by Karl Seguin or running through the Try Redis interactive tutorial.

First up we need to install a Go driver (or client) for Redis. A list of available drivers is located at https://redis.io/clients#go.

The two drivers that I would recommend are gomodule/redigo and mediocregopher/radix. They are both well designed and actively maintained.

The key differences are that Redigo is completely self-contained (with no external dependencies) and it has a smaller, simpler API than Radix. Radix, on the other hand, provides support for Redis sentinel and cluster implementations.

Throughout this post we'll be using the Redigo driver.

Getting started with Redis and Go

As an example, let's say that we have an online record shop and want to store information about the albums for sale in Redis.

There's many different ways we could model this data in Redis, but we'll keep things simple and store each album as a hash – with fields for title, artist, price and the number of 'likes' that it has. As the key for each album hash we'll use the pattern album:{id}, where id is a unique integer value.

So if we wanted to store a new album using the Redis CLI, we could execute a HMSET command along the lines of:

To do the same thing from a Go application, we need to combine a couple of functions from the gomodule/redigo/redis package.

Using them is quite straightforward in practice:

In this example we're not really interested in the reply from Redis (all successful HMSET commands just reply with the string "OK") so we don't do anything except check the return value from Do() for any errors.

When we are interested in the reply from Redis, the gomodule/redigo/redis package contains some useful helper functions for converting the reply (which has the type interface{}) into a Go type we can easily work with. These are:

Let's use some of these in conjunction with the HGET command to retrieve information from one of the album hashes:

It's worth pointing out that, when we use these helper methods, the error they return could relate to one of two things: either the failed execution of the command, or the conversion of the reply data to the desired type (for example, we'd get an error if we tried to convert the reply "Jimi Hendrix" to a float64). There's no way of knowing which kind of error it is unless we examine the error message.

If you run the code above you should get output which looks like:

Let's now look at a more complete example, where we use the HGETALL command to retrieve all fields from an album hash in one go and store the information in a custom Album struct.

Or an alternative, and arguably neater, approach is to use the redis.Values() and redis.ScanStruct() functions to automatically unpack the data to the Album struct, like so:

Note: Behind the scenes the redis.ScanStruct() function uses Go's strconv package to convert the values returned from Redis in to the appropriate Go type for the struct field — similar in principle to what we did in the previous example. By default this supports integer, float, boolean, string and []byte fields. If you need to automatically scan into a custom type, you can do so by implemeting the redis.Scanner() interface on your custom type.

Using in a web application

One important thing to know about gomodule/redigo/redis is that the Conn object (which is returned by the Dial() function we've been using so far) is not safe for concurrent use.

If we want to access a single Redis server from multiple goroutines, as we would in a web application, we must use establish a pool of Redis connections, and each time we want to use a connection we fetch it from the pool, execute our command on it, and return it too the pool.

To avoid detracting from the main purpose of this blog post (which is talking about Redis) we'll use a deliberately over-simplified pattern for our web application. If you'd like to follow along, create a basic application scaffold like so…

…And use the Redis CLI to add a few additional albums, along with a new likes sorted set. This sorted set will be used within the GET /popular route to help us quickly and efficiently retrieve the ids of albums with the most likes. Here's the commands to run:

In the albums.go file we'll define a global variable to hold a Redis connection pool, and we'll re-purpose the code we wrote earlier into a FindAlbum() function that we can use from our HTTP handlers.

Alright, let's head over to the main.go file. In this we will initialize the connection pool and set up a simple web server and HTTP handler for the GET /album route.

It's worth elaborating on the redis.Pool settings. In the above code we specify a MaxIdle size of 10, which simply limits the number of idle connections waiting in the pool to 10 at any one time. If all 10 connections are in use when an additional pool.Get() call is made a new connection will be created on the fly. The IdleTimeout setting is set to 240 seconds, which means that any connections that are idle for longer than that will be removed from the pool.

If you run the application:

And make a request for one of the albums using cURL you should get a response like this:

This creates a problem. Ideally we would want both keys to be incremented at exactly the same time as a single atomic action. Having one key updated after the other opens up the potential for race conditions to occur.

Let's create a new IncrementLikes() function in the albums.go file which uses this technique.

We'll also update the main.go file to add an addLike() handler for the route:

OK, on to our final route: GET /popular. This route will display the details of the top 3 albums with the most likes, so to facilitate this we'll create a FindTopThree() function in the albums.go file. In this function we need to:

Again, it's possible to imagine a race condition occurring here. If a second client happens to like an album at the exact moment between our ZREVRANGE command and the HGETALLs for all 3 albums being completed, our user could end up being sent wrong or mis-ordered data.

Using this from our web application is nice and straightforward:

One note about WATCH: a key will remain WATCHed until either we either EXEC (or DISCARD) our transaction, or we manually call UNWATCH on the key. So calling EXEC, as we do in the above example, is sufficient and the likes sorted set will be automatically UNWATCHed.

Making a request to the GET /popular route should now yield a response similar to: